Dame Elizabeth Esteve-Coll, formerly Vice-Chancellor of the University of East Anglia (UEA) and Director of the Victoria & Albert (V&A) Museum, has been a trustee of the Sainsbury Institute for the Study of Japanese Arts and Cultures since its establishment in January 1999. In her distinctive warm strong voice, she shared her experience of being present at founding the Institute with Professor Nicole Rousmaniere, the founding director and presently the research director of the institute.

‘My first real encounter with Japan was preparation for the Japan-Britain exhibition “Visions of Japan” in 1991, soon after I became director of the V&A in 1987. At the time there was a great black hole in public knowledge about the history and culture of Japan. I went to Tokyo and also had hours of discussions with the Japanese team at the Museum. We wanted to do something that reflected both aspects of Japan, its cutting-edge technology and the great historical trajectory that lies behind the country. Eventually ISOZAKI Arata, a marvellous architect with an international reputation, developed the concept “Play”.’

Dame Elizabeth went on to explain how the exhibition was divided into three sections. This division reflected aspects of Japanese aesthetics such as the propensity to deconstruct and reconstruct in traditional building, a reference to the contemporary city of Tokyo, and the underlying belief in meditation, quietness and nature. As Dame Elizabeth explained this installation,

‘The first section illustrated the structure of the temple and the Japanese Tea House. The Tea House was electronically controlled so that an intimate interior space suddenly opened out to give visitors an idea of what happened there before it closed again. The next part recreated Tokyo street life, with traffic lights, noise, bustle and all the characteristic Japanese urban activity. The third section was quintessential Japan: a totally empty space with a huge wall showing a succession of images accompanied by Japanese music. Towards the end of the exhibition we had a wonderful tree on which people could tie their wishes. It was astonishing how people really engaged with this process; we had to clear the tree every evening as it was absolutely full by the end of the day. A frequent wish was the desire to know more about Japan.’

After her first visit to Japan for the 1964 Olympics, Dame Elizabeth noted the immense changes in the country in her second visit for the 1991 exhibition. She was particularly fascinated by the scale of the modernized Tokyo over that period as she observed its growth into a vast technological metropolis dissected by high speed roads.

First Visit to SCVA and Meeting the Sainsburys

Dame Elizabeth forged good friendships with the Japanese people during her tenure at the V&A. At the end of her directorship she was invited to become Vice-Chancellor of the University of East Anglia (UEA). The Sainsbury Centre for Visual Arts (SCVA) at UEA already housed Sir Robert and Lady Lisa Sainsbury’s collection and was an integral part of UEA; the Sainsbury Institute was a later of their vision and generosity. Asked by Professor Rousmaniere for her first impression of SCVA and the collection, she replied:

‘Norman Foster’s SCVA building has a very special aesthetic. Its double skinned walls provide a wonderful open panoramic space to show objects. The collection has been very well displayed under Sir Robert’s supervision and the juxtaposition of historical artefacts with contemporary art works was completely new in museums. That initial visit was the first time I saw Yuri Kuper’s work and I also have a strong memory of the Khmer torso.’ 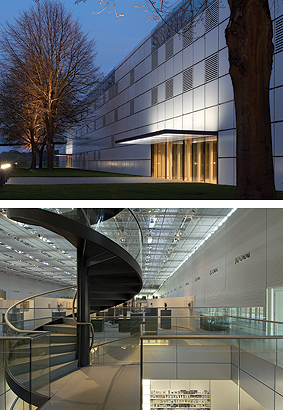 Exterior and interior of Sainsbury Centre for Visual Arts, designed by Sir Norman Foster in 1978

Dame Elizabeth met the great art patrons, Sir Robert and Lady Lisa Sainsburys, a year before she left the V&A. When Professor Rousmaniere asked if she had any idea at that point that she would later spend a considerable amount of her time with them, she recalled a meeting with Lady Sainsbury at the V&A.

‘I had no inkling whatsoever about their plan and vision, but Lady Sainsbury got in touch saying she would like to talk to me. She was curious about my taste in ceramics and what I thought about the V&A collections. At the time we were putting the ceramic collection on the database, so when she asked how many Lucie Rie pots we had, I was proud that we could instantly respond and took her to the department to ask. The answer came back that we had 32. Lady Sainsbury looked very amused and said ‘I’ve got 36!’ So it was a kind of a competitive patronage, her personal collection versus an international collection.’

During her Vice-Chancellorship at UEA Dame Elizabeth developed a genuine friendship with the Sainsburys, who often came to the campus. In fact, they remained in touch after she retired because of ill-health and moved to France. It was then that she had a phone call outlining their vision for a Japanese research institute.

She remembers the initial conversation on that point. ‘Sir Robert said “We have decided to sell a painting of the poet Baranowski by Modigliani which we bought as a joint wedding present. We are going to use the money to fund a Japanese institute and we’d like you to handle the sale.” I came straight back to England to make the necessary arrangements.’

After restoration, the portrait toured Geneva, Tokyo, and New York to raise awareness of the forthcoming sale. When asked how the Sainsburys felt about selling the Modigliani, Dame Elizabeth said:

‘They were hugely excited. As their wedding present it carried powerful emotions, and conservation revealed the painting’s extraordinary subtle blue. It was a beautiful event in every sense – they chose their absolutely premier object and they sold it for what they believed was the right thing to do. I went to Tokyo to see the painting at a private view evening and I thought it had been very successfully displayed there.’

The Modigliani painting ‘Portrait de Baranowski’ was sold by Sotheby’s in 1998, and The Sainsbury Institute was founded in January 1999 through the enthusiasm and generosity of the Sainsburys and with the constant support of Dame Elizabeth. In our next issue of the SISJAC e-magazine we will continue her story into the Institute’s first decade.